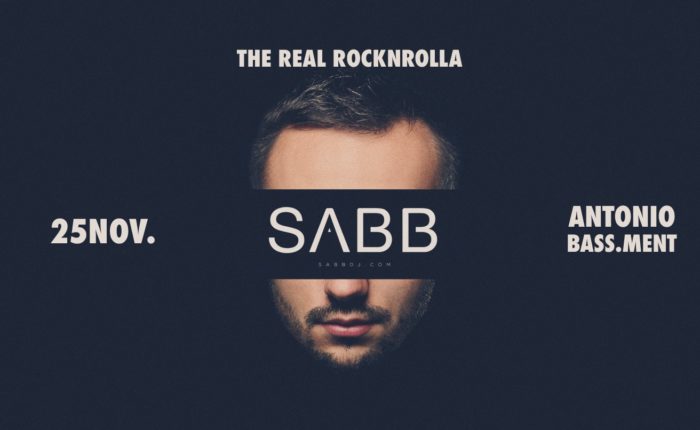 Worldclass DJ and producer Sabb, will be this week’s guest. From Miami to Dubai and Ibiza, Sabb has made a name for himself and is considered to be one of the most upcoming artists worldwide. He is accompanied by our very own, Dj Antonio Official and Bass.Ment.

Switzerland based, Kosovan born DJ/producer Sabb is an artist whose presence and maturity in the studio seems to develop with every release to which he puts his name. His production pedigree was quickly identified by some of the scene’s most respected tastemakers, with early outings on Matthias Tanzmann’s Moon Harbour, Nic Fanculli’s Saved Records and Noir’s Noir Music preceding remixes for the likes of John Digweed, Sasha, Hot Since 82 and Hector Couto.

His signature sound – a fluid mix of crisp drum grooves, chunky, overheated basslines &amp; pitched-down vocal sampling – has quickly won audiences over in their droves, a fact evidenced by 2014 track ‘Illusiones’ becoming one of the season’s most Shazam-ed tracks in Ibiza.

Fast forward to February 2015 and Sabb was ranked the second most charted artist on Resident Advisor, which immediately saw him tapped by Rumours boss Guy Gerber. The first of two quick-fire singles, ‘One Of Us’ ft. Forrest, then followed on Moon Harbour in June, featuring a notable remix from the legendary Dennis Ferrer – a record heavily backed by BBC R1 tastemakers Annie Mac &amp; Pete Tong amongst others.
The release went on to feature at #60 in Mixmag’s top 100 tunes of the year, while his recent release on Suara, ‘Condor1’ alongside Lee Van Dowski broke the Beatport Top 20 earlier this year.

Having also played some of the world’s most iconic clubbing spaces; from Space in Miami, Pacha and Cielo in New York, Blue Marlin in Dubai and Hive in Zürich, not to mention a residency at Pacha Ibiza, Sabb’s stock as a DJ continues to rise indefinitely.

By the end of 2015, Sabb was ranked as one of the highest charted artists of the year on Resident Advisor, perfectly setting the scene for a landmark year in 2016. And with a packed touring schedule, including upcoming gigs at Watergate (Berlin) and Hive (Switzerland), and releases on highly respected labels Moon Harbour, Saved and Circus over the coming months, Sabb looks to further cement his deserved place among electronic music’s elite.